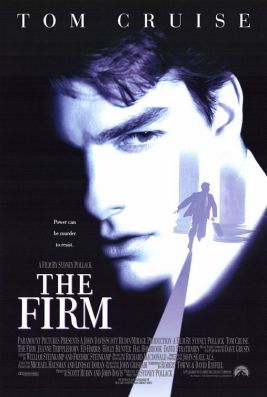 It doesn’t take a long time to realize that Tom Cruise’s 1993 John Grisham-adapted starrer The Firm gave the actor an opportunity to do something he hadn’t so far in his illustrious (Rain Man, Born on the Fourth of July) career – totally slum it. In fact this is as close as Tom Cruise ever got to being the ‘bland, one-note’ screen presence that his most ardent critics were already accusing him of. And yet The Firm remains a curious, if not unique choice for him to headline at a time when scripts were surely stacking up at his agent’s office with no end in sight. Part thriller, part critique of the corrupt justice system, Sydney Pollack’s (Havana) film strays very little from Grisham’s original text, albeit trimming it so as to fit within a two and a half hour running time.

Sight unseen, there are some warning signs that this film may as well be a disaster, not the least of which is that extraordinarily lengthy running time. Yet Pollack’s casting of the film wins us over with bit parts from the likes of Ed Harris, Gary Busey and the extraordinary Holly Hunter who inexplicably ended up being nominated for an Oscar for 6 minutes of screen time! And while ‘spot your favorite character actor’ is fun to play for a while, we need an interesting story to get into. Grisham’s tendency to write mainstream consumerist mysteries is warning sign number two, and yet the adaptation by David Rabe (Casualties of War), Robert Towne (Days of Thunder), and David Rayfiel (also (Havana), plays with time in a way that, while cliched by today’s standards, keeps the mind at attention. It’s a guessing game all the way to the end, even as the film’s villains are slowly revealed and the consequences of their ruthlessness are in full tragic display.

The acting is certainly up to par for this type of film. Cruise has always been a fan of surrounding himself with talent and he once again succeeds at doing that without being overshadowed. Jeanne Tripplehorn is equal parts beautiful and complicated, Gene Hackman is having a great time playing a role he can do in his sleep, and Hal Holbrook’s performance lends the film an air of credibility rarely seen in a Grisham adaptations. I won’t mention any more of the performances because the varied famous people in bit parts serve to alleviate the running length of this film.

Which inevitably brings me to the editing work done by father-son team Fredric and William Steinkamp. The Steinkamps’ work has always been problematic. Their editing is the opposite of dynamic and frequently their films are longer than need be. The Firm is no exception. No other technical aspect deserves mention, except for the Oscar-nominated score by Dave Grusin which sounds terrible in the film. Grusin has always written scores for albums rather than films, and his ill-fitting work on The Firm is the most egregious example of this tendency.

Still, there is a lot to recommend here. A strong script and great acting by many screen favorites is usually enough to put any film on my good side, but add a strong dose of “Cruise control” and you have a pretty good film for a Sunday afternoon. Just make sure you set aside enough time to watch it all the way through to the end
.