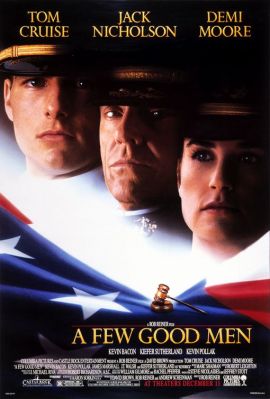 It’s difficult to look back on A Few Good Men with anything but fondness. In a way, it’s not just a film – it’s a representation of a now bygone era. It’s the type of film your dad says “they don’t make  anymore.” What director Rob Reiner’s film reminds me most of is a time when movies were not afraid of being preposterous and didn’t always fall back on the safety net of subtlety, as most 21st century dramas do. I miss that time and I truly miss the era that brought us A Few Good Men.

Rob Reiner has never called attention to himself as a filmmaker and while that puts focus on the characters, it makes A Few Good Men oddly forgettable, especially for visually inclined viewers. Fortunately, the film is endlessly re-watchable  a testament to the excellent performances by it’s three leads (Tom Cruise, Demi Moore and Jack Nicholson) and a very strong supporting cast that includes the likes of Kiefer Sutherland and Kevin Bacon. Also its story line is one that actually is fairly universal – name a decade that isn’t filled with ‘potential war crimes’ headlines and news stories. The film’s universality in appeal from a political and entertainment standpoint is a testament to the way it uses cliche to it’s advantage.

Most people will be entertained by A Few Good Men. Some may hold it up as an example of unspoiled filmmaking – a nostalgic piece of Americana to be revisited regularly in the decades to come. I don’t have an issue with either viewpoint, and as the credits rolled I realized that I’d been the witness of something truly rare – a film that doesn’t strive for greatness, but despite the lack of effort, immeasurably achieves it.