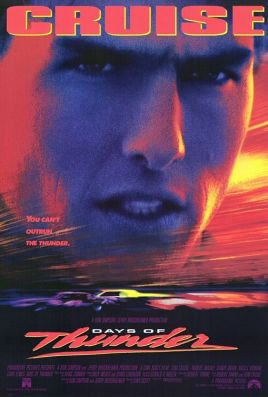 By the late 80’s/early 90’s Tom Cruise had built up enough pedigree with an Oscar Nomination (Born on the Fourth of July) and consistent box office successes that he could do anything he wanted. He chose Days of Thunder which certainly fits the bill of a star vanity project. Cruise co-wrote the story with old pal Robert Towne (who turned it into a screenplay) and had another industry friend Tony Scott direct it. Unfortunately, the result was underwhelming – a badly paced, unattractive and emotionally inert NASCAR film with little to differentiate it from other films of its ilk (like the equally pedestrian Driven, released 10 years later).

The premise is pretty simple. Tom Cruise plays Cole Trickle – the new kid on the racing scene looking to outshine veteran Rowdy Burns (Michael Rooker) with the help of old time crew chief Harry Hogge (Robert Duvall). As the story goes on, he meets Dr. Lewicki (Nicole Kidman) who not only heals his wounds resulting from numerous car crashes, but also helps him reveal the softer side hidden under his bad boy exterior. Will Trickle finally be able to defeat Burns while also pairing up with the stunning Lewicki? Or are there more important things in life than winning a NASCAR race?

To call the film cliche-ridden would almost be underselling it: the whole thing is one big cliche. But that doesn’t matter – so was Top Gun, and yet in that film director Scott and Cruise were able to make a compelling, human (relatable if not realistic) film filled to the brim with entertainment. Thunder tries to do the same but fails at almost every turn. When a tragic event occurs in Thunder it’s emotional weight is undermined by a lack effort on both the director’s and performers’ parts to make it palpable. Of course, leave it to me to bad-mouth the late Tony Scott, but it just seems that he was as uninterested in making this film as Towne was in writing a good script. There isn’t any excitement in the racing scenes and the results pack little punch and are of little consequence.

But Scott was a good actors’ director and he shows it again here. Cruise is on total cruise control, relying more on his looks here, than in anything he’d starred in since Top Gun. Kidman tries harder as the race car drivers’ in-house doctor. In fact the conflict she has with Cruise, while predictable, is more effective than the one driving the main story arch and she deserves most of the credit for its effectiveness. Duvall is merely serviceable, but when he tries to chew the scenery, you can almost sense how he single-handedly elevates the whole film to a new level. My favorite performance though was by Michael Rooker as Cruise’s arch-enemy. His character represents the screenplay’s strongest point as it turns the audience’s perception of him and Cruise’s character on its head. Rooker is able to snarl with the best of them, but when he needs to show vulnerability he has an ability to make us care like no one else in the film.

While there are a few bright spots in Days of Thunder, it’s only required viewing for Cruise or Scott completists. Everyone else can simply go back to Top Gun and avoid, what is in my opinion Cruise’s worst film thus far in his career.