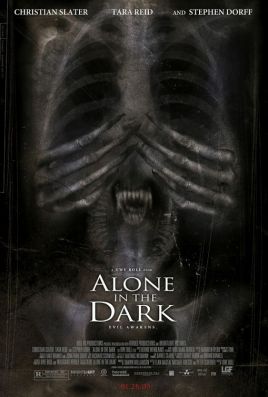 So what makes a film bad? People who attempt to discredit the film criticism profession (such as it is), vocally express their doubt that any film can ever be determined as being objectively bad. They claim that art is relative, and that no individual or even collective can claim that any of it is irrefutably, 100% worthless. The rottentomatoes.com page for the much-maligned Uwe Boll film Alone in the Dark pretty much proves them right – currently the film holds a rotten 1% rating, with only 1 out of 116 total critics claiming that it’s worth spending the time and/or money it would presumably take to see it. But even more than that, all the negative ratings vary from one to the next. Each critic holds his or her own personal reason for disliking Alone in the Dark, with very few claiming that absolutely all of the aspects of the film as seen, remain rotten to the core. The argument is that even if not one print or online critic felt brave enough to give this or any other maligned film a fresh rating, we still wouldn’t have the ability to objectively point out its failures. Oh, and I haven’t even gotten to the audience rating yet – currently at 21%, because the can of worms that opens up will take a lot more than a single paragraph to sort out.

My rating for Boll’s film is an F – the lowest rating in my repertoire. If I had to describe it in one sentence it would be – an absolutely pointless waste of celluloid adding nothing, safe a big black blemish, on the cinematic landscape. But I still think it’s better than Boll’s previous outing House of the Dead. In a way, film ratings and sites like Rotten Tomatoes, while fun to peruse, should be taken with a grain of salt. I’m sure there are many who own Alone in the Dark and enjoy watching it repeatedly, embracing Boll’s throwback-European framing of the scenes and quick-cut editing, among other things. Still, I’m not sure that fact threatens film criticism in any way. Long seen as a type of censorship by its most ardent opposition (Boll being at the forefront lately), film criticism I would argue is needed, to first and foremost enrich society’s cinematic dialogue. Too often we label a film as either good or bad without asking ourselves about the reasons behind it. We ignore it’s artistic merits, and even the devices the filmmaker may use to entertain us, preventing us from enjoying cinema as it is meant to be enjoyed – as art – each film with it’s own unique inadequacies and benefits.

My unique perspective on Alone in the Dark is fueled by the fact that it may be one of the biggest missed opportunities of the last decade. Based on an early 90’s PC game that dealt with main character Edward Carnby (played by Christian Slater in the film) attempting to solve a mystery involving a suicide in a haunted house. While navigating the maze-like corridors of the house, Carnby realizes that what first appeared to be a suicide, may not be one at all. Yeah… that’s not what Boll’s movie is about. The adaptation penned by no less than three screenwriters, centers on a city (that is never named) being invaded by the demon-like creatures in the game. Carnby and his girlfriend, anthropologist Aline Cedrac (Tara Reid in one of the few major film roles she’s had recently) attempt to solve the mystery of this potentially apocalyptic scenario while dodging random attacks by the creatures.

Boll fails to deliver on this simple plot for two reasons – the minuscule budget he was given, and the simple fact that his talent is far outweighed by his lack of creativity. This combination makes for a fairly befuddling movie-going experience. The plot is simply not a $20 million plot. In fact, if the screenwriters had stuck to the video game’s setting more closely, $20 million might have been more than enough. Unfortunately for Boll, his lack of imagination disallows him to shoot the whole film in a simple house, instead choosing to go for the ‘bigger is better’ approach. The film’s characters face off with the creatures in museums, on boats, dark forests and mines. Each creature battle is more confusing than the next, but Boll never fails to implement gory  Final Destination-esque deaths to the proceedings (another element missing from the game, included here simply because Boll wants to add the purported coolness factor). But Boll isn’t even successful at being a naive crowd-pleaser. At least James Wan’s similar efforts to please span from original ideas. Here, the only idea close to being original is casting Tara Reid as one of the most intelligent anthropologists in the world. Who would ever think of doing that?

Of course Boll has frequently singled-out two specific scenes as being “unlike anything we’ve seen before.” The first one is an attempt to make one of the shootouts (that takes place in a warehouse) stylish and video game-like by setting it to fast-paced almost grunge-like dance music, and editing it to match the tempo. The second is a sex scene between Slater and Reid set to Youssou N’Dour’s “7 Seconds” – a song that preaches non-violence in an overwhelmingly violent world. It’s an ironic inclusion, given the gratuitous violence found throughout the production. It goes without saying that neither scene has been matched on the embarrassment scale in the intervening six years by any major production (though Zack Snyder has made an effort).

Strangely, the actors are not wholly to blame here. Slater’s performance fits the film’s B-movie aspirations like a glove, while Reid provides some much-needed eye candy and her character’s intelligence makes her more than just the token helpless hottie we are used to seeing in horror films. Stephen Dorff is in a role he could do in his sleep, as Cmdr. Burke – Carnby’s old nemesis who turns heroic. Finally, B-Movie veteran Matthew Walker shines as the villain, infusing his stock role with emotional complexity that goes beyond the script. But Boll, either under-uses or squanders the performances, never giving the characters proper back-stories or arcs, aside from Carnby and his doesn’t make a whole lot of sense anyway.

The film’s production values are predictably pedestrian. It’s not just the low budget that hurts the film, it’s Boll’s incompetent handling of it. A filmmaker like Rob Zombie or even Alexandre Aja have shown an ability to do wonders with lower budgets and even less plot. But Boll and his usual collaborator, cinematographer Mathias Neumann can’t come up with a single memorable shot. The instantly forgettable cliche classics include the camera entering the barrel of a gun to show the bullet slowly settling into the firing position, the aftermath of a massacre shot with red paint strewn about on white walls, and the one where a random bad guy gets shot in the chest, but is so hard to kill that after the next edit the blood on his shirt has all but disappeared. Actually, for that last one they were just too lazy to reapply the aforementioned red paint to the new shirt between takes.

And that’s the type of half-assed filmmaking that I cannot find it in my heart to endorse. Alone in the Dark is filled with continuity issues, inconsequential characters and lines of dialogue, and not a single shot that comes even close to being atmospheric. This is a poor man’s horror film, and unfortunately for us, that poor man is Uwe Boll.