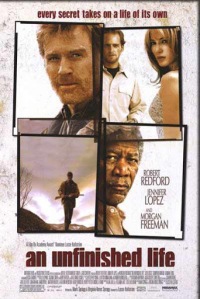 Lasse Hallstrom’s tumultuous follow-up to the equally-abrasive The Shipping News is at first glance a quiet story about the loss of a son and father that quickly turns into a brazen attack on familial abuse. Hallstrom’s films are usually characterized by the tension brimming just under the skin of the characters – ones who (with the exception of the villains) seemingly engage in an endless battle to suppress a violent release. In An Unfinished Life, the clear villain is a physically abusive boyfriend (played snarkily by Damian Lewis) whose behavior eventually chases away his girlfriend Jean (Jennifer Lopez) and her daughter Griff (Becca Gardner) to Jean’s father-in-law’s Wyoming farm, which due to a tragedy that happened a long time ago, is the last place she wants to be.

Her father-in-law Einar is played by Robert Redford in a touching performance that combines the toughness of an Old West rancher with the sentimentality of a man nearing the end of his rope. It’s a career-defining performance, and a timely reminder of the talented, larger-than-life movie star Redford used to be more than two decades ago. Hallstrom successfully balances the brooding of Einar with Morgan Freeman’s live-in ranch hand Mitch. Haunted by a bear attack that’s left his face scarred for life, Mitch refuses to dwell in the past and his relative jubilancy helps Einar get through the day. Never a director who allows to be bullied by big-name stars, Hallstrom manages to extract a rare understated performance from Freeman, and many have labeled it as their favorite in the film.

As Jean and Griff’s lives collide with those of Einar and Mitch the emotional consequences are both painful and cathartic. The characters transitions from trying to simply ‘get along’ to purifying their souls of past demons. The film certainly is spiritually ambitious (labeled as ‘hokum’ by the boorish Stephanie Zacharek at Salon.com) and rewarding, invoking the two concepts most paramount in the human spirit – forgiveness and fulfillment, the latter of which goes back to the film’s title.

The film may not be labeled as a “brave choice” for anyone involved, as the basic thematic elements have been utilized in many cinematic incarnations during the last two decades. But it is once again Hallstrom who allows the film and its characters to breathe within the premise’s seemingly tight constraints. Part of the way he does this is by letting the supporting characters share the spotlight. Inspired turns by Lewis, Josh Lucas and Camryn Manheim make the small town setting feel fuller and more complete. Hallstrom also adds color to the proceedings by infusing a few Western staples in what is mostly a dramatically inclined film. He portrays two rowdy bar patrons perfectly, complete with uncalled-for sexism and drunkenness. Also, the abusive ex-boyfriend is portrayed as a dangerous outlaw riding into town. “It’s pretty ‘country’ out here.” he jokingly remarks in one of the film’s most memorable lines, perfectly encapsulating the feel that Hallstrom is going for.

Aiding him in getting that feel right are not only screenwriters Mark and Virginia Spragg, but also frequent collaborator cinematographer Oliver Stapleton. Stapleton’s patient eye and lingering camera mixes well with editor Andrew Mondshein’s love of longer takes and smoother flow. But the film isn’t just well-framed and perfectly paced – it sounds great as well. Underrated composer Deborah Lurie’s score sounds predictable at first glance, but like the film as a whole, is a lot more complex underneath the surface, with theme-based memorable movements thrown out in favor of stream-of-consciousness reactionary harmonies.

Overall, I can’t help but to recommend this film. Sure, there are some out-and-out cliches in the first act, but as the second act hits its stride we realize that the film is going to previously unforeseen places, and audiences will be surprised by the trajectory the individual stories take. By the film’s culmination, we are emotionally taken to a place that is utterly changed from the one at the very beginning, which is what Hallstrom had been aiming to do from the very beginning.