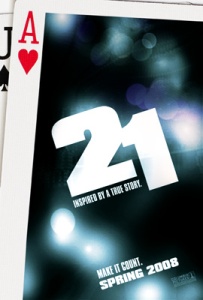 The same people who are embracing 21‘s forced lavishness and phony sense of trend-setting, are also the ones who snubbed Curtis Hanson’s Lucky You – a film that at least earned its place in the poker film genre, without the need to seem like the hippest thing to come out of Vegas since Ocean’s Thirteen. Robert Luketic’s whole filmography appeals to the crowd that thinks a scene like Sam carrying Frodo up Mount Doom is too melodramatic and heavy-handed, but find the final speech in Legally Blonde an inspiring moment that we should all learn from. 21 is similar in its structure, relying on a final scene that is supposed to be somehow inspirational, but no other previous scenes hold the same emotional weight which shows Luketic’s inability to build-up to moments like that thematically. At the end when main character Ben (Jim Sturgess) redeems himself and is rewarded for it, I felt like I was watching a repeat of Luketic’s superior Kate Bosworth starer Win a Date with Tad Hamilton! But unlike Hamilton, the characters in 21 are unlikeable and undeserving assholes whose cockiness is so repulsive that by the end I hoped any one of them would accidentally drown in the Bellaggio’s lake. Of course Luketic wallows in the ‘coolness’ of these characters, tries his best (and fails) to make them the epitome of the Vegas lifestyle, and ultimately gets lost in a barrage of staged scenes of faux-importance that are harder to sit through than Jane Fonda’s over-reacting in Monster-In-Law. Still, Luketic doesn’t get everything wrong, and surprisingly, displays a good eye for the esthetic as Las Vegas is rendered in a way that Steven Soderbergh can only dream of executing. Still, the same thing can be said about Curtis Hanson, and actually even more so, because Hanson portrayed a Las Vegas that is much closer to what it is in reality – down to the seediness of its forgotten corners. In 21, Vegas is the slick, safe, and tranquil place that it’s not, but Luketic is not a rookie at envisioning ideal environments that present a fantasy world the audience will never be a part of. The acting in the film is also good, but with a cast like this, a blunder here would have been unforgivable. One wonders what Kevin Spacey and Laurence Fishburne thought when they saw the script being handed to them – it is an empty farce, a one-trick pony that delights only in the moments when the characters are not acting in ways that make me fear that one of our top schools is filled with imbicels. They probably hoped they would come out unscathed while also collecting their respective paychecks. Now that the film has become a box office success, it looks like their plan worked.