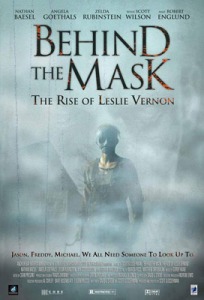 Behind the Mask: The Rise of Leslie Vernon is a horror fanboy’s wet dream and worst nightmare. On one hand it embraces the genre much better than whatever hateful Eli Roth film is in theaters now, and on the other it puts it down with its tongue-in-cheek way of making fun of it. Either way this film is strictly for horror fans only and everyone else will be left out in the cold. From the endless references to classic horror films like The Last House on the Left and Hellraiser, to the cameos by such favorites like Kane Hodder (from Jason fame) and Robert Englund, one could almost feel the saliva building up in numerous fans’ mouths with just the mention of this movie. It is too bad then, that the filmmakers decided to make this spoof something that the vapid Wes Craven would be proud of. It is influenced totally by Craven’s Scream trilogy (a pedestrian series of films in their own right) and its unoriginal execution can not be mistaken for anything less than that as its ‘cleverness’ is nothing new to modern spoof cinema.

With films like Shaun of the Dead and Severance appearing in theaters every year now, it is difficult to make a spoof that is intriguing enough so that it is worthy of seeing more than once, if at all. Scott Glosserman, who I hope doesn’t turn into another one of Quentin Tarantino’s failed proteges, tries hard to make a mockumentary about the rise of an up and coming slasher film psycho that an audience member can take seriously, but this is all so light-hearted and the jokes come so often that one starts laughing at the movie, not with it. Glosserman’s film is one of those you see and afterward you ask yourself “Was there a point to it or was this just made as some kind of practical joke?” The fact that Glosserman argues that there is a point to it is as ridiculous as the fake scenarios scattered throughout this film. The only point of this film is for Glosserman to show-off while endorsing the gore-heavy state of today’s horror films.

I’m sure Glosserman was congratulated by the vapid Eli Roth for making this movie. After which, Roth flashed his tic tac-like penis to promote his batshit-crazy Hostel: Part II. And I’m sure Glosserman was also given a good boost of confidence by the film’s successful festival run. Successful only because of the fact that horror film festivals are full of people who will jump on anything that looks at the horror genre with a lighter attitude. Because that’s really the reason films like this exist isn’t it? They are not here to pay homage to old slasher movies, but are here to make the modern horror genre seem more universal. What this film is saying is (almost copying Roth word for word here) “Hey why do you have to take all of this so seriously? It’s only a movie.” Well, I’m sorry, but I think footage of a penis being castrated like the one in Hostel: Part II (to mirror Roth’s no doubt) should be taken with more than just a grain of salt.

But for Glosserman and crew it should be. At least that’s what I got from Behind the Mask since it apparently exists in an alternate universe where there are no consequences to a person’s actions. While that is something found commonly in today’s films, it contradicts the idea that this film’s setting can be random and the events would be equally as bloody and cynical. It is this cynical view of the world that makes the first half of this film pretty appealing and unconventional. Before it turns into a generic slasher spoof that incidentally starts to take itself too seriously, it subtly sends a message about our society’s tendency to over-exaggerate and bloveate an event so much so that they contribute to its negative consequences. It is even better that the film doesn’t turn into an anti-media tirade, but focuses on more specific targets.

Honestly, I wouldn’t even care about its up front promotion of a horrid genre if the film was technically executed well. Unfortunately it is not. That fact is noticeable in all the aspects of filmmaking, but I have to begin with the acting which is uniformly bad across the board. As Leslie Vernon Nathan Baesel does the best job, because he is given the best lines. Honestly though, he is not a good actor yet. But if he looks like he isn’t taking anything that comes out of his mouth seriously, he can be forgiven, because the script is not that good anyways. The supporting actors are over-the-top victims or annoying victims or smart-ass victims, or ones that look pretty weird and in a cynical way the film makes the audience want them to die.

The look of the film is not very good due to its low budget. The locations look like rejects from the set of the new Halloween remake and the costumes are not that great either and nothing looks authentic. Maybe that adds to the whole ‘documentary’ feel of the film, but when something is far from being easy on the eyes, you start to want to look away. That is what Michael Bay’s studio Platinum Dunes has strayed away from as their films always have high production values, no matter how much gore is on display. The editing and cinematography to be found here can’t measure up to Saw standards even and those are pretty low standards.

Overall, Behind the Mask: The Rise of Leslie Vernon is a film that has some great aspects, especially in its world view, but there is so much ugliness throughout that it is almost impossible to enjoy the film and laugh at its half-hearted jokes. As far as the actual slasher part, unless you are a hardcore fan of the horror genre and the mere sight of Robert Englund takes your breath away, you will enjoy it. I did not enjoy that though, because the film’s substance was shoved aside so carelessly in order to make a weak argument for the existence of people like Eli Roth. And for me that is the worst thing a film can do.