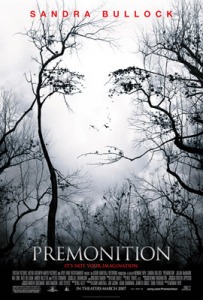 There are many things that prevent Premonition from being the movie it should have been. The film’s intelligence and lofty goals are great, but the bland and sloppy execution by director Mennan Yapo hinder’s the film’s effectiveness at every turn. The screenplay by Bill Kelly is basically all the film is, since Yapo seems terrified of messing with it. A lot of the scenes feel like they could have been taken right off the page without any effort to make them better. This means that the film is about as exciting as reading a script and the only time a script is exciting is when it’s written by M. Night Shyamalan.

The film deals with a woman Linda Hanson (Sandra Bullock) whose husband (Julian McMahon) dies in a tragic car accident. Or at least she is told he died in a car accident. In the following week she finds out that he is dead/not dead/is about to die in what seems to be a time-lapsing order. While Linda tries to figure out what’s happening, why is it happening, and if her husband’s death is preventable, the audience, well me at least, is trying to find a point. When the message of the film is finally revealed (using a pries of course) near the end of the film it’s empty and almost indescirnable. I t isn’t until the film’s ridiculous reveal (ridiculous because it is technically impossible within a non-fantasy world which the film is set in) that Linda is pregnant that the puzzle pieces of the script attempt to put together all the plot points.

I noticed that if Kelly had written this week in chronology without the time-swap plot point and left the film as a simple drama, he would have been much more successful at reaching his goal and sending his “the world is full of miracles” message. The film is basically an excerpt of the life of these people, during which there are hard questions to be answered and big problems to be dealt with. This family’s effort to stay together, even until the very end, is something Kelly is only marginally successful at depicting realistically enough for anyone to care. The inevitable death of the husband and father is one that should be more powerful as an image, but the script leaves this character off-screen for too long and when he is on screen he is dry and emotionless, so when he dies, one feels nothing would change.

The acting in the film is not good. Sandra Bullock is unattractive, and inappropriate in her role. I think she needs to take a break. She has been in good films of late (Crash, The Lake House, Infamous), but she was frequently the worst actress in them. The other actors do a simply alright job, except for the emotionless McMahon, but even though they all have fair performances, Bullock is on screen above 95% of the time and the movie depends on her terrible performance and is therefore plagued by it at every turn.

Technically, the film doesn’t deliver on the promise of its artsy poster. Cinematographer Torsten Lippstock uses his camera only to reveal the so-called ‘twists’ in the script, and adds nothing new or exciting with his bland colring. For some reason blood is not red enough, and the day is not bright enough. I understand the need to suppress, but being consistent with it is something that should not be rewarded, as it creates an ugly, one-note film. A positive thing about the camera work is its movement and thrashing about during scenes that are supposed to hit hard with the funeral home casket scene being a stand-out. The editing is good, but editor Neil Travis seems to be going strictly by the script, without any needed deviations. The best part of the technical side of the film is Hans Zimmer protege Klaus Badelt’s emotional-to-the-core musical score. It elevates all of the emotional scenes to an undeserved level with touching tones and grand compositions that are almost too much for the mnimalist approach of the film.

Overall, Premonition is an average film. A few good production values and a relatively intelligent if flawed screenplay act as its saving graces. But the bad acting, unexciting direction, and overall blandness of the production brings it way down. it is unlikely anyone will hate this film, but it is even more unlikely that anyone will find something to love about it. Premonition simply comes and goes, it’s just that after it has gone you find you’ve spent $10. What a bad feeling.