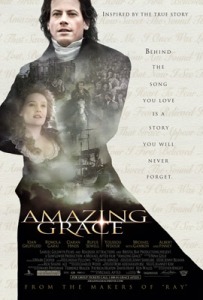 Filmmaker Michael Apted, known for The Up Series, is a frustrating director whose films range from horrid (Enough) to quite good (Coal Miner’s Daughter) has decided to tackle the relatively unpublicized 19th Century British Transatlantic slave trade with Amazing Grace. Apted is a documentary film veteran and this stoic effort poses much better as a historical retelling of William Wilberforce’s (Ioan Gruffurd) actions to stop the slave trade, than as an emotionally dramatized account. While many will label this film as a lost opportunity in rendering that piece of history with the appropriate thematic resonance it deserves, that assumption couldn’t be more erroneous. Apted embraces that piece of history and gives it the treatment it deserves by being painstakingly historically accurate and by giving the actual events the allotted time that they deserve.

The film also functions as a biography of Wilberforce, as writer Steve (Dirty Pretty Things) Knight milks his accomplishments, big and small, for all their worth. Knight wants the audience to look at Wilberforce as a hero by the end of the film and looks for audience reaction at every turn. Every line of dialogue written for Wilberforce is either intelligent, clever, funny, or all of the above. This character alone pulls us into his story, not only because of Gruffurd’s likability, but also because of the way he’s written. Knight takes almost a Shakesperean approach, paralleling Shakespeare’s Grumio in The Taming of the Shrew. Wilberforce always seems to be the anti-heroic simpleton. At one point a character asks him: “Why is it you only feel the thorns when you stop running?” he responds: “Is that some sort of heavy metaphorical advice?” which is not only pleasant and funny, but because of the character’s later feats.

It isn’t easy to pull for the smart-ass in the story, but actor Ioan Gruffurd’s smirk which transforms into a respectable, heroic stare near the end of the film is one of the best acting jobs of the year so far. Playing his wife Barbara, up-and-coming actress Romola Garai is simply exquisite and considering the importance of her character, definitely steps up to the plate and delivers on to remember. And I haven’t even gotten to the veteran actors involved like Albert Finney, Toby Jones, Michael Gambon, and Rufus Sewell whose performances are amazing end-to-end.

Technically, the film is pretty good, and considering it is Apted directing, that is quite a pleasant surprise. The cinematography by Remi Adefarasin represents his best since the TV movie Elizabeth. The color palette is on the darker side, but he successfully highlights individuals and objects, making the film look very polished, almost digitalized, and not gritty at all. Composer David Arnold needed to score a film like this and Venus to demonstrate he can do more than simply Bond action music. His action tendencies are thrown away here almost totally, but his tendency to be grandiose (he scored Godzilla after all) is welcome during Wilberforce’s speeches to Parliament. But everyone that is part of the tech teamon the film deserves mention, from Production Designer Charlie Wood who gets the small things right, to costume designer Jenny Beaven who is a veteran when it comes to period pieces and her expertise and the chances she takes add a lot to the film.

I am definitely giving this film a full recommendation. It is nothing short of inspirational and it is also a film that a lot of work was put toward in order to make it accurate to the times it portrays. Its universal quality lets people who don’t even normally enjoy period pieces, have a good time cheering on the hero and laughing at his clever remarks. But most importantly, Amazing Grace teaches us a lesson that is both historical and important in contemporary times. What Wilberforce did was simple – he realized what Britain was doing was wrong, and he didn’t simply stand aside, instead he stood up for what he believed was right. It is amazing ho often cliched sayings like that turn out to actually be true, and terribly underused, in the real world.