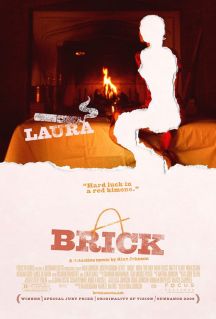 For those who have forgotten how fun, entrancing, and entertaining film-noir is, please see Brick. Director/Writer Rian Johnson’s attempt at combining cinema’s oldest genre with a High School drama is risky, but Johnson is successful at every turn. He has created one of the most technically sound pictures of the year, and is also one of the best acted. It is about a teenager whose ex-girlfriend goes missing and now he’s trying to find her, but it isn’t easy, because there is a whole High School crime ring standing in his way. He develops an ‘if you can’t beat them, join them’ attitude and becomes a part of the high school crime scene. Actor Joseph Gordon-Levitt, who is the most solid actor his age, turns in an amazing performance, and while it looks like something you might find in a Gus Van Sant film most of the time, when his character calls for emotion, Levitt delivers in a startling and hard-hitting way. But the dialogue, while hard to get used to at first, is the star of the show. I mean with lines like “Maybe I’ll just sit here and bleed at you.” you can’t lose. I can’t recommend this enough.

3 thoughts on “Quick Review: Brick A-”