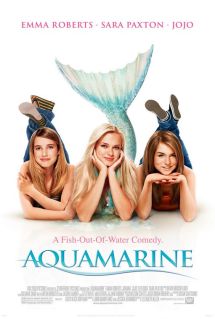 Aquamarine isn’t without its flaws. And I mean flaws. The cliches are so many I lost count in the first two minutes. The dialogue is so elemental and so bad that listening to it was like nails on a chalkboard. The fact that a character only refers to underwear as undies is infuriating. Still this fish-out-of-water (literally) story is likeable, and is far from being offensive to anyone. Even the teen girls are not really as dumb as their dialogue and the script lets us know that gradually. Still, you have to be too naive and immature to believe the storyline of this film. A mermaid accidentally ends up in a pool after a thunderstorm?????? Wow. Oh wait there is more!!!!!!! When the mermaid is out of the water her fishtail turns into a pair of nice legs. Oh, if only Ariel could do that. Oh wait there is more!!!!!! The mermaid falls for the boy that one of the girls that found her in the pool likes. Oh, the conflict, the drama. This is not on pair with say Mean Girls as teen romantic comedies go, and it isn’t even an admirable entry in the genre, but if your girlfriend really doesn’t feel like watching King Kong on DVD yet again, this could be a passable alternative. Other than that forget it.