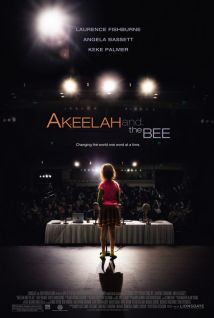 Akeelah and the Bee is the first movie ever to be produced by Starbucks Entertainment and it is a very good start for the newly formed production company. When I saw this thoughtful, exciting, and emotional film I almost thought about forgiving them for monopolizing the coffee market. But I didn’t, because I knew they would still be making billions a year, centuries from now. Anyways the movie is about Akeelah (played bravely by Keke Palmer), who is one of the best spellers at her school and enters a competition that might get her to the National Spelling Bee. She is helped out by Dr. Larabee (Laurence Fisburne) who is strict, but knowing and who becomes her mentor and teaches her how to spell better not only by practicing spelling, but by getting her to think about the right things. Her mother is played by Angela Basset and Basset here is forced to take Julliet Binoche’s role in 2005’s superior Bee Season, as the diapproving mother. While she does a good job, her role is nowhere near as challenging as Binoche’s because this is after all a kids movie, while Bee Season was aimed at adults. Anyways, this film made me feel good at the end. It’s uplifting and the stand-out is Keke Palmer who can command the screen even when surrounded by stars like Laurence Fishburne.