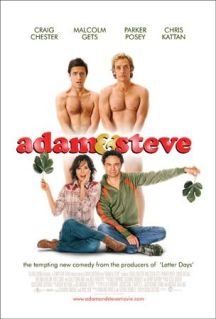 Any movie that includes the unbelievable and unprobable fact of Chris Kattan dating a hottie like Parker Posey is automatically put on the ‘don’t take seriously’ list. After all, Kattan is Kattan. No matter what’s on the script, Kattan will always act like Corky Romano, and that is not always a good thing. It’s not a good thing here, because Kattan’s character is so obnoxious that it takes away from the main message of the script. The script attempts to compare a heterosexual relationship involving Rhonda (Posey) and Michael (Kattan) with a homosexual relationship between Adam (Craig Chester who also wrote and directed) and Steve (Malcolm Gets). The film is essentially a romantic comedy, but it fails because it spends too much time with the gay characters and it evolves into a pro-gay film. That isn’t all bad, but a political message really leaves the viewer with a bad taste in his/her mouth, something that the non-political Brokeback Mountain didn’t do. It also weakens the film. Halfway through I thought that this would be a simple comparison that lets the audience form it’s own conclusions about homosexual relationship. Unfortunately, Chester (who is gay in real life too) feels the need to send a message and that ultimately kills the movie.