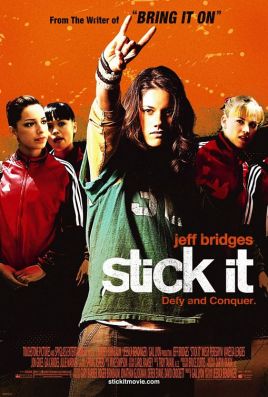 There aren’t many movies that I have found as annoying and unforgiving as this one. The fact that my rating is what it is, and doesn’t reflect that belief should tell you how split (pun intended if there is one) I am about this film. On one hand it’s well shot and edited, with plenty of eye candy (female gymnasts are hot!) to keep you interested. On the other hand there are the cliches, annoying characters, unfunny lines, and predictable ending that have become all too common for films in this genre.

The plot is so refurbished and previously-overdone that even reading it can bring back flash backs from previous teen sports competition movies (Bring It On, Sugar & Spice, The Bad News Bears etc.) It is about Haley Graham (Missy Peregrym) who is an all-star national gymnastics competitor-turned rebellious skateboard kid that gets in trouble with the law, because she steals from and vandalizes property. The judge decides to sentence her to gymnastics camp, since as we all know, there isn’t much difference between a sports camp and a prison. I mean seriously! Gymnastics CAMP! CAMP! This guy is the best judge in the world. If I was accused of vandalizing and stealing, I would not only be sent to jail, but I would be expelled from school and all that. And the closest thing to gymnastics camp I’ll get is jumping over things while running from the cops. Gymnastics camp! puh-lease! Anyways, gymnastics camp just happens to be the last place Haley wants to find herself, because a) she has given up on gymnastics and b) her fellow gymnasts hate her guts, because she cost the U.S. an important meet by quitting right in the middle of it. also there is the strict Coach Vickerman (Jeff Bridges) who pushes her to the limit, either because he hates her for the meet thing or he is just trying to make her realize the importance of team spirit and the great feeling of training, competing, and ultimately winning a meet. I’m betting on the latter.

Director/Writer Jessica Bendinger (who also wrote the equally annoying but enjoyable Aquamarine and of course Bring It On) is going through the motions. She doesn’t want to direct actors to their full potential, although the full potential of many of these actors is comparatively low. Also her screenplay’s attempts to be funny almost always fail, because she doesn’t want to offend anyone. That leaves a film that forces the audience to laugh at lines that are ‘funny’ because they are supposed to be, not because they are satiric or intelligent. And even then the lines are delivered by these amateur actors that deliver their lines in a way that is funny for all the wrong reasons.

Still, there are positives to this film, especially on the technical side of things. First and foremost there is the great editing by Troy Takaki who seems to be an expert at making the gymnastics competition about as interesting as they can. Yes, MTV-style editing is used at times, but Takaki isn’t afraid of long shots and doesn’t cut away from some of cinematographer Daryn Okada’s more grandiose shots. Okada also brings a lot of color to the proceedings and I like how the lighting of a scene often reflects the emotions and feelings that the audience should feel through the scene. For instance, the skateboarding scenes are filmed in a way that might channel feelings of concern and even dread. But later when the gymnastics competitions show up, so do the bright colors that translate into a happy-go-lucky feel. That may seem tried-and-true, but it was better than anything in She’s the Man, throughout which, the cinematographer seemed confused about the feel of specific scenes.

Overall, Stick It is annoying but fun, cliched but good-natured, and unfunny but painless. I know many will slam this film for being nothing more than a waste of time, and they might be right, but wasting your time watching this is a better alternative to wasting your time and watching something like say Bubble, now isn’t it? Yup, it is.

One thought on “Review: Stick It C+”