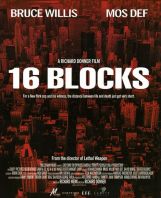 The truth is that I wasn’t looking forward to seeing Richard Donner’s latest debacle at all. I mean how do you expect me to not pre-judge this film when the last movie he made, Timeline, was the worst movie of that year, by far! Still, this movie is not even close to being as bad as that one, because it has some great acting by Bruce Willis, Mos Def, and David Morse. It tells the story of a cop (Willis) who needs to escort a witness (Def) 16 blocks from a police station to a courthouse. Of course, problems, like crooked cops and confrontations between the cop and the witness, abound and the 16 blocks seem a lot longer than that now, don’t they. The film is surprisingly talky and while that is different from the normal suspense thriller, if only the conversations led to something relevant to anything. They seem to be put there to kill time and I didn’t seem to care. The best part of the film is the finale which has the same thrill ride signature, that Donner puts in every movie. That of course only rounds the movie out to average, or maybe even below average. I would rather watch the last half-hour of this film and skip the rest and so should you.